New ESPAD results: teenage drinking and smoking down, but concerns over risky cannabis use and new addictive behaviours 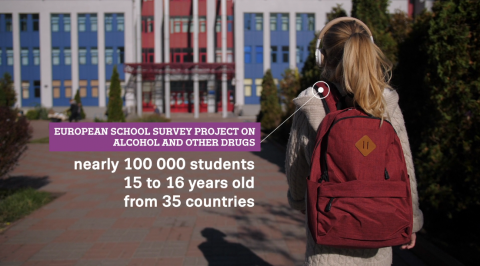 Smoking and drinking among 15–16-year-old school students are showing signs of decline, but there are concerns over potentially risky cannabis use and the challenges posed by new addictive behaviours. These are among the findings released today in a new report from the European School Survey Project on Alcohol and Other Drugs (ESPAD). The study, published in collaboration with the EU drugs agency (EMCDDA), is based on a 2019 survey in 35 European countries, including 25 EU Member States (1).

This is the seventh data-collection wave conducted by the ESPAD project since 1995. A total of 99 647 students participated in the latest survey round, responding to an anonymous questionnaire. The ESPAD Report 2019 features information on students’ experience of, and perceptions about, a variety of substances, including: tobacco, alcohol, illicit drugs, inhalants, pharmaceuticals and new psychoactive substances (NPS). Social media use, gaming and gambling are also covered.

To keep up with emerging risk behaviours among young people in Europe, the ESPAD questionnaire is constantly adapted to include new topics, while maintaining a set of core questions to track long-term trends.
To better describe contemporary patterns of nicotine consumption, the scope of the 2019 survey was extended to include e-cigarette smoking for the first time in all participating countries. Screening instruments were also employed to assess risk behaviours, including problem gambling, high-risk cannabis use and self-perceived problems with social media use and gaming (2).

Alcohol use remains high among adolescents in Europe, with an average of over three-quarters (79%) of school students having used alcohol in their lifetime and almost half (47%) having used it in the last month (‘current use’)(3). But trend data (4) show some steady decreases, with levels now lower than in 2003 when both peaked at 91% and 63% respectively.

The prevalence of ‘heavy episodic drinking’ (5) reached its lowest level in the 2019 survey (35%), following a peak in 2007 (43%)(Table 14). Data show that the gender gap in the prevalence of this pattern of alcohol use has narrowed over time (boys 36%; girls 34%) (Figure 20). Changes in drinking regulations at national level may have contributed to the decline in alcohol use among young people.

Positive developments are also seen with regard to teenage smoking, against a backdrop of tobacco policy measures introduced over the last two decades. Between 1995 and 2019, ESPAD averages for cigarette use declined for lifetime use (68% to 42%); current use (33% to 20%) and daily use (20% to 10%). New data reveal high prevalence of e-cigarette smoking — 40% for lifetime use and 14% for last-month use — with those who have never smoked cigarettes (‘never smokers’) reporting higher rates of this behaviour than ‘occasional smokers’ and ‘regular smokers’. Although the study did not investigate the contents of e-cigarettes, it is likely that a high proportion of these devices include nicotine and that overall adolescent nicotine use could be rising again. This issue calls for further investigation given the potential for public health consequences.

Illicit drug use declining, but concerns over high-risk cannabis use, prescription drugs and NPS

The latest survey shows that, on average, 1 in 6 school students (17%) reported having used an illicit drug at least once in their life, with levels varying considerably across the ESPAD countries (range: 4.2%–29%). Lifetime prevalence of illicit drug use in this group has been declining slightly since 2011 (Table 14), although has been generally stable over the past two decades.

Cannabis is still the illicit drug most used by school students in ESPAD countries. On average, 16% of respondents reported using cannabis at least once in their lifetime (11% in 1995), while 7.1% reported last-month use (4.1% in 1995). Lifetime use has slowly declined since 2011, while last-month use has stabilised since 2007. High-risk cannabis use, explored for the first time in all participating countries in the 2019 survey, revealed that, on average, 4% of respondents fell into this category and are potentially at risk of developing cannabis-related problems. Understanding and monitoring this phenomenon is important for formulating prevention policies.

The non-medical use of prescription drugs among adolescents remains a concern. For example, 6.6% of those surveyed reported having used tranquilisers or sedatives, and 4% having used painkillers, ‘to get high’ in their lifetime. On average, 3.4% of students reported having used new psychoactive substances (NPS) in their lifetime — a small decrease from 4% in 2015 — but still representing higher levels of use than for amphetamine, ecstasy, cocaine or LSD taken individually. Almost all NPS users are polysubstance users
(also consuming alcohol, cannabis and stimulants). The continued emergence of NPS and polysubstance use among NPS users underlines the need for close monitoring.

According to the report: ‘The high degree of normalisation of gambling in societies and the culture of gambling within the family environment have been recognised as important drivers of gambling onset and youth progression into problem gambling’. The 2019 ESPAD results show that gambling for money has become a popular activity among school students in Europe, with 22% of respondents reporting gambling on at least one game in the past 12 months (predominantly lotteries). An estimated 7.9% of students had gambled for money online in that period. The screening tool used in the latest survey to estimate problem gambling revealed that, on average, 5% of students who had gambled in the last 12 months fell into this category.

Over the last two decades, driven mainly by the increasing popularity of smartphones and tablets, gaming has become more popular and is increasingly played on these devices. Around 60% of respondents reported having played digital games on a typical school day within the last month (69% on a non-school day). In most countries, boys spend twice as much time gaming as girls.

The report concludes: ‘With the 2019 data collection, ESPAD brings together comparable information from over 30 European countries over a period of 24 years. This places the project in a unique position to continue to make a valuable contribution to the development of credible and effective policies and interventions to protect youth health and social wellbeing in general’.

ESPAD (www.espad.org) is a collaborative network of independent research teams in over 40 European countries and the largest cross-national research project on adolescent substance use in the world. It is coordinated by the ESPAD Italian team at the National Research Council of Italy (CNR-IFC). The EMCDDA (www.emcdda.europa.eu) is a decentralised EU agency based in Lisbon which provides the EU and its Member States with factual, objective, reliable and comparable information on drugs and drug addiction and their consequences to inform policymaking and practice.

(1) The report (in English) and data underpinning the analysis are available online on the EMCDDA website www.emcdda.europa.eu/publications/joint-publications/espad-report-2019_en and a dedicated ESPAD landing page. Tables can be downloaded in Excel format.

(3) The percentages noted in this news release are ESPAD averages (non-weighted average of national averages).

(4) For ESPAD temporal trends, country estimates were averaged across 30 countries with valid estimates on at least four
(including 2019) out of seven time points.

(5) Five or more drinks on at least one occasion in the last 30 days.