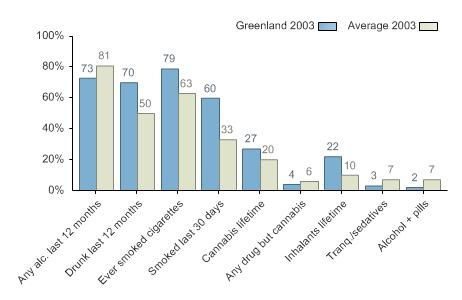 The proportion of students in Greenland who had any alcohol consumption during the previous 12 months is lower than the average for all countries (73 versus 83%). In contrast, the proportion reporting having been drunk during the same period is substantially higher (70%) than average (53%). There are also relatively more students in Greenland who had ever been smoking (79%) and who had smoked during the last 30 days (60%) than the averages (66 and 35% respectively). The proportion of students who report having used marijuana or hashish is also higher than the average (27 versus 21%), while the use of any other illicit drugs is less frequent (4 compared to 6%). The use of inhalants is much more common in Greenland (22%) than the average of the ESPAD students (10%). However, the figures are in the opposite direction for tranquillisers and sedatives without a doctor’s prescription (3 versus 6%) as well as for alcohol together with pills (2 compared to 7%).