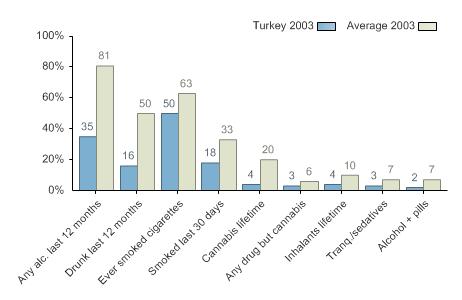 Turkey is the only country in which the students show lower figures than the ESPAD average for all the nine variables summarised in this chapter. Much fewer had been drinking alcohol during the last 12 months (35 and 83% respectively) and the difference is also substantial when it comes to drunkenness during the same period (16 compared to 53%). Lifetime smoking of cigarettes was reported by 50% in Turkey and among 66% in the ESPAD countries. The corresponding figures for smoking during the last 30 days were 18 and 35% respectively. Very few (4%) had used cannabis, which is much lower than the ESPAD average (21%). Any other illicit drug but cannabis was reported by 3% of the students in Turkey and by 6% as the average. Inhalants had been used by 4 versus 10%, tranquillisers and sedatives without a doctor’s prescription by 3 versus 6% and alcohol together with pills by 2 versus 7%.