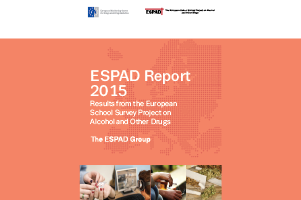 Smoking and drinking among 15–16-year-old school students are showing signs of decline, but there are concerns over challenges posed by new drugs and new addictive behaviours. And while overall illicit drug use is stable in this group after previous increases (1995–2003), it continues at high levels. These are among the findings released today in the latest report from the European School Survey Project on Alcohol and Other Drugs (ESPAD). The study, published in collaboration with the EU drugs agency (EMCDDA), is based on a 2015 survey in 35 European countries, including 24 EU Member States 1.

This is the sixth data-collection wave conducted by the ESPAD project since 1995 (every four years), the latest round coinciding with its 20th anniversary. A total of 96 043 students participated in the survey, responding in school to an anonymous questionnaire. The results, showing 20-year trends, will be presented at the EMCDDA today during the agency’s annual expert group meeting on general population surveys 2

The ESPAD Report 2015 features information on students’ experience of, and perceptions about, a variety of substances including: tobacco, alcohol, illicit drugs, inhalants, pharmaceuticals and new psychoactive substances (NPS). Special attention is given in the new report to NPS, excessive internet use and online gaming and gambling, all of which were monitored for the first time in this survey round.

The EMCDDA includes ESPAD data in its annual reporting on the drug situation and the two bodies work closely together to enhance understanding of long-term drug use trends among this population in Europe 3.

Decline in teenage drinking and smoking, but heavy episodic drinking still a concern

Positive developments are seen with regard to teenage smoking across the board (lifetime use, last-30-day use and daily use), against a backdrop of tobacco policy measures introduced over the last two decades 4.  In the 2015 survey, over half of the respondents (54% — range: 34% to 84%) reported that they had never smoked, while less than a quarter (21% — range: 6% to 37%) reported they were ‘current smokers’ (last 30 days). The proportion of students who started daily smoking at an early age (before 13) decreased over the 20 years: from 10% to 4%. Daily smoking, including early onset of this practice, continues to be more prevalent among boys, but the gender gap has narrowed over the 20 years as it has for smoking overall. Despite strict regulations on tobacco in most countries, over 60% of adolescents still reported relatively easy access to it.

Alcohol use among adolescents in Europe remains high, but here also, time trends since 1995 show some positive developments. Lifetime use of alcohol decreased from 89% to 81% between 1995 and 2015 and last-30-day use from 56% to 47%, with a marked decrease seen in both patterns after a peak in 2003.

The prevalence of ‘heavy episodic drinking’ has remained unchanged over the 20 years, with values in 2015 similar to those in 1995. However, after progressive increases from 1995, the prevalence values decreased clearly from 2011 to 2015 (for boys 44% to 37%; for girls 38% to 33%) in some countries. Less positively, every third student (35%) reported heavy episodic drinking in the past month in the latest survey. Over three-quarters of respondents (78%) reported relatively easy access to alcohol.

Illicit drug use stable, but still at high levels

On average 18% of students reported having used an illicit drug at least once in their life, but levels varied considerably across the ESPAD countries (range: 6%–37%). Following a general upward trend between 1995 and 2003 in the prevalence of illicit drug use, this has remained largely stable since 2003. However, illicit drug use remains at high levels, with 10 countries reporting levels in excess of 25%.

Around three in 10 students (30%) considered cannabis to be easily available. The perceived availability of other illicit drugs was relatively low: ecstasy (12%), cocaine (11%), amphetamine (9%), methamphetamine (7%) and crack (8%).

Across the ESPAD countries, 4% of the students reported lifetime experience with new psychoactive substances (NPS) (range: 1%–10%), while 3% said they had used them in the past year (range: 1%–8%). On average, NPS seem to be more commonly used than amphetamines, ecstasy, cocaine or LSD, all of which have lower lifetime prevalence rates, underlining the need to closely monitor NPS.

With the internet now an integral part of daily life, ‘the development of patterns of addictive use among children and adolescents needs to be closely monitored and investigated’, states the report. Questions on the amount and purpose of internet use were included in the latest questionnaire, with a focus on six activities: social media use; information seeking/surfing; streaming/downloading; online gaming; online money gambling and buying/selling.

On average, students used the internet on 5.8 days per week. Girls used social media regularly more often than boys (four or more days in the last week) (83% versus 73%). Online gaming was more prevalent among boys (39% compared to 7%). In all countries, considerably more boys than girls reported gambling experience in all forms (23% versus 5% on average) or gambling frequently (12% versus 2%) in the last year.

The ESPAD Group expresses concern over the popularity of online gaming and youth gambling: ‘Measures to prevent adolescents from developing problems associated with gambling, such as debts, psychological deficits and social disadvantages, are of high priority’.

EMCDDA Director Alexis Goosdeel said: ‘For the past 20 years, ESPAD has been providing us with valuable insights into patterns and trends in adolescent substance use across Europe. Now this latest report has extended the scope of the survey to include not only new drugs but also new and potentially addictive behaviours that are raising public concern, such as excessive internet use, gaming and gambling. By monitoring these new developments, ESPAD is increasing its contribution to protecting adolescents from the negative consequences of substance use and of addictive behaviours in general’.

1 The report (in English) and the full dataset underpinning the analysis are available online at www.espad.org. Tables can be downloaded in Excel format.  All samples were nationally representative, apart from Belgium (Flanders), Cyprus (government controlled areas) and Moldova (Transnistria region not included). ESPAD surveys allow comparisons between participating countries through a common methodology. Under its first ENP technical cooperation project, the EMCDDA co-funded ESPAD 2015 surveys in Georgia, Moldova and Ukraine.

2 For further details on this meeting, see emcdda.europa.eu/meetings/2016/gps

4 Policy measures have been implemented in the majority of European countries in the context of the Framework Convention on Tobacco Control (FCTC) over the past two decades (Shibuya, K., Ciecierski, C., Guindon, E., & Bettcher, D. W. (2003). WHO framework convention on tobacco control: development of an evidence based global public health treaty. British Medical Journal, 327 (7407), p.154).